It's not original, but I love it.
Media frenzy is naturally way ahead of sensible information, as usual, so I appreciated this photograph demonstrating "Swine Flu Transmission".
For those who are interested in factual information on the problem, please see this collection of reliable sites.
1 comment:

Let's start with a nursery rhyme.
Does everyone remember this mindless but catchy children's song? Then sing along:

A long time ago, in an Open Directory Project far, far away, the DMOZ Emperor decreed that nine of his most loyal and experienced startroopers should become "Volunteer Administrators", and he gave them special powers to rule the rest of his Empire.
For a couple of months everything continued much as before.

But then strange things started to happen behind the forcefield hiding the Admins from the community: one by one, they started to disappear! The first one to go simply vanished suddenly, without a word.

Soon afterwards another started drifting away, making occasional ghostly appearances which grew farther and farther apart until all that remained was his toolbox, glowing gently.
Seven green Admins.
The next departure was the most admirable, because of all the remaining Admins this person was the only one who took their guidelines seriously:

"Actively participate in the functioning of the Admin group. In addition, administrators should be visible in discussion forums and editing activities. If time constraints do not allow an active level of participation for an extended period of time, the individual is expected to resign from their Admin privileges."

Six green Admins.
All Admin discussions are secret, so nobody really knows what happened next, but over the next year or so there were fewer and fewer sightings. Rumours abounded, of course, and one Admin was even thought to have run away and joined the circus! Two more were simply assumed to have discovered that life outside the Empire was more appealing.
Down to three green Admins.

So for another year or so, the directory was managed by just one-third of the original group, although except for the one mentioned above, the others all retained their special powers, and would swoop in unexpectedly from time to time, to ensure they were not forgotten.
Not surprisingly, this lack of effective leadership meant the whole of DMOZ started to lose its way. A great many experienced editors left, and a cloud of gloom and despondency settled over ODP-land.
News of all this eventually reached the Emperor, who made one of his rare appearances to announce that he had chosen seven more of his most loyal startroopers to become Admins. 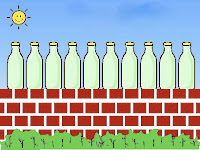 There was much rejoicing at this indication that he still cared for the directory. Now the community would regain its lost energy! The editors would have direction and strong leadership! DMOZ would triumph once more!
Hurrah!!
But almost immediately, unexplained things started to happen once more, out of sight in Admin-land.
Two of the remaining original group soon vanished (while still retaining their powers of course), but one of the new Admins decided to relinquish the super-powers.
And then the only still-active member of the original group resigned altogether.
Back to six green Admins (uh oh, here we go again).
Of those six, only four have been seen in the community often enough to be well-known, and now one of those has recently resigned.
So out of 16 people specially chosen by the Emperor to manage DMOZ, we are left with
4 invisible and inactive Admins,
2 invisible but apparently active ones, leaving
just 3 who are effectively fulfilling their roles.

I certainly hope this is not
~~~ THE END ~~~
But then, all this is just a fairy tale, so perhaps all is well and there's a happy ending after all!
6 comments:

Today's topic is "Things which can bite you in the bum".
1. Offering to pay for a listing in ODP/DMOZ
There is never, ever any charge for a site to be listed in the Open Directory Project, but ignorant, deluded, or merely hopeful webmasters and SEO experts continue to think they can buy their way in.
Sometimes they are the victims of con artists who pretend to be able to list a site, but who just take their money and disappear.
Other times they think that by offering to pay, a corrupt editor will break the rules just for them.
Both actions are doomed to fail, and result in long-lasting consequences:
Any editor found to have asked for or accepted payment will instantly lose their account,
and
site(s) associated with the bribe are likely to be permanently banned from the directory.
This advice has been repeated many many times over the years, in all sorts of places, so it seems unbelievable that people are prepared to risk those consequences for something so completely unnecessary. But they do. I guess it's just true that "there's a fool born every minute".

2. Not looking where you are (ahem) going.

Back in the days when most Australian homes had a "backyard dunny", it was not uncommon to find spiders and lizards lurking there. Particularly feared was the Redback spider, which liked to live under the actual seat.
While not poisonous, its bite causes severe pain, and victims often need to be hospitalised. Embarrassment about the bite's location was almost as painful, as this famous song by Slim Dusty explains.
The fear of "The Redback on the Toilet Seat" is ingrained in every Australian, even though inside plumbing has made it more of an ancient legend. However, I was astonished to learn that similar dangers are still a threat in the modern American household, as demonstrated in this scary picture!
The message is clear: always look first. 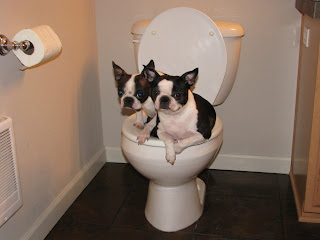 (Warning: readers of a sensitive disposition may like to skip the first section, which deals with bodily functions.)

In last week's classes, my group of medical students learned about the signs and symptoms of inflammatory bowel disease, so the following announcement seemed very timely, and I took it along to today's session.

"The medical profession expressed qualified support this week for the release of a new office-testing kit for medical practices. Consisting of a slim spatula, a glass slide, and 2 sachets of reagent, Poosmear (TM) will enable on-the-spot testing for mucus and inflammatory cells in fresh faeces.
The makers expect the kit to be of use primarily to gastroenterologists and GPs, and they claim it will be a useful screening tool for patients suspected of having inflammatory bowel disease (IBD), as well as offering reassurance to any patient concerned about altered bowel habits.


The test involves the collection of faeces directly from the rectum, with the sample being smeared liberally across the slide and allowed to dry. (As this might take some time in the case of diarrhoea, the use of a hairdrier is suggested.) When the sample is completely dry, the reagents are added and the resulting colour change compared to a chart.

The kit is expected to cost about $20, and is distributed by [company] Ltd."


I am relieved to report that most of group guessed the truth even before they got to the company name. Besides, they are used to my turning up with stuff I write on the train. ;-)
In fact I had a far better April Fool's "catch" rate with my fellow tutors. LOL

I have previously mentioned some of the little things which I find very rewarding in my role as a volunteer in the Open Directory Project, and another one happened in the last couple of weeks.
Many hundreds of people apply each week to become editors, and I described the application and review process in detail in "FAQ about ODP/DMOZ editing Part 1: Applying". It can be a rather dispiriting task to review one poor or careless application after another, and the ones which are acceptable tend to stand out from the crowd. Unfortunately, many of these new editors do only a few edits before losing interest, but every now and then one of them will use their account with great enthusiasm: reading the many resources, using the internal forums, searching for worthwhile sites, improving the category, and generally doing their best to learn how to be a useful and productive member of the editing community.
It is always a pleasure to see someone re-apply after an unsuccessful application, and then go on to become an enthusiastic and conscientious editor. I recently joined someone like this to the directory, and it's a real treat. :-)
No comments: