I dislike posting purely copied material, especially when it is unattributable, but I heard about this list, and it is every bit as wonderful as I'd hoped from its description.
A long-running TV quiz show in the UK (recently revived) is Family Fortunes, and these are some answers given by contestants over the years. You can also find videos of some of these priceless moments, which confirm their authenticity.
I was honestly crying at some of them - enjoy.


Q: Name something you take to the beach      A: Turkey sandwiches

It's Fathers Day in Australia, and although it was never celebrated much in our family, it's reminded me to think about my father, who died almost 25 years ago. 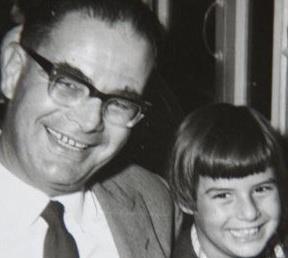 He was over 40 when I was born, so I only ever knew him as a middle-aged man, and he spent his last few years lost in the heart-breaking fog of dementia, but I was lucky enough to know him well until I was about 20.

Physically, he was certainly someone to be noticed, standing almost 2m tall, and always very "well-covered", despite my mother's best efforts. But it was his personality and intellect which made him larger than life. He came to Australia as a child, in a somewhat sickly condition, having been born prematurely and suffering from the cold and damp of England. The family had little money, so he left school at the minimum age, and went to work as a travelling salesman for ornate glass wall lamps.

From this inauspicious beginning he rose to become a "Captain of Industry", rubbing shoulders with the chairmen of Australia's biggest companies, while remaining modest and out of the limelight himself. As his personal wealth increased, he diverted more and more of it to charitable purposes, eventually setting up a Foundation with a huge reserve of money which is still being invested and distributed by independent trustees, even so many years after his death.
He never publicised these philanthropic activities, and I doubt his big-business colleagues even realised where his heart lay in this regard, because in corporate circles he was renowned for his sharply analytical mind, courageous business decisions, and steadfastly confident opinions.

He was not only a self-made man, but largely self-educated. Having had limited schooling, and with much of his early education interrupted by illness, he never wrote legibly, and throughout his life relied on printing in capitals or dictating for someone to type. His interest in reading, however, was greater than anyone else I have known, and this gave him a depth and breadth of knowledge which I have never managed to emulate, despite my best efforts.
He could discuss almost any topic with enthusiasm and a staggering grasp of detail, but English and Australian history were, I think, his greatest love. We travelled many times to the UK when I was young, and on each trip I remember him entertainingly recounting various important events which had taken place everywhere we went, always including some fascinating trivia.

I am forever grateful for the time he spent reading to me as a child, despite his very time-consuming business interests, and I cannot look at a copy of "Wind in the Willows" or "The Magic Pudding" or "The Water Babies" or "David Copperfield" or "Peter Pan" without hearing his voice doing the different characters and keeping me enthralled through innumerable re-readings.

However, the greatest gift he ever gave me was his unswerving belief in my worth and abilities. Perhaps sensibly, this was not shared by my mother, and certainly not by myself, but it is indeed a precious thing to have someone who firmly believes you are special and important throughout your childhood and adolescence (despite all evidence to the contrary!)
Whenever I have been tossed about by the all-too-frequent rough seas of adulthood, I try hard to recapture the feeling of security and confidence he created in me back then.

He was a remarkable and memorable figure in the world of big business, to be sure, but his finest role was as Chairman of the Dad and Daughter Club, and for that he will always take pride of place in my heart.