Everybody Needs a Cubby

I'm not sure how well the term translates outside Australia, so first let me explain that a cubby house can be any sort of fully enclosed, private play area for a child, usually involving make-believe games.

It can be as simple as a large cardboard box or an assortment of blankets draped over a table and chairs, although some parents buy astonishingly elaborate constructions which serve exactly the same purpose.

Unfortunately, as we grow older and more cynical, many simple pleasures lose their magic, and the humble (or even grandiose) cubby house usually stops being special.

I think that's a great shame.

A cubby provides you with a  private, safe and secure place in which to play, relax, plan, daydream, and spend time alone or with friends (real or imaginary). Doesn't that sound appealing?
In fact it is so appealing a concept that we have devised all sorts of more sophisticated substitutes.

I am lucky enough to have a mobile cubby. 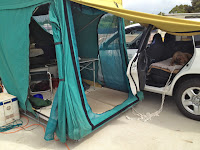 It was bought many years ago with the intention of taking joint holidays into remote areas, but after only a couple of such trips (although not because of them), my co-traveller became a less significant part of my life, and the idea of solitary camping was a bit daunting. However, last week on my birthday I decided to celebrate by undertaking a very non-adventurous (but therefore non-stressful) expedition ... to a coastal town less than an hour's drive away. 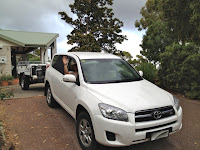 Feeling unjustifiably intrepid, I loaded the dogs and a very few supplies into the car and set off with my cubby in tow. To my immense personal satisfaction I managed the drive, the reversing into the caravan park site, and the setting up without too much difficulty, despite the wind and rain. Yes, of course it was wet and windy - we seasoned campers expect such tribulations.

After an afternoon dodging showers to walk along the beach (a rare pleasure for those of us who don't live near the sea), I prepared my birthday feast: fish 'n' chips 'n' champagne. The entertainment was provided by a UK crime show played on my laptop, the canvas proved entirely waterproof, and to put it simply, I was as happy as a clam. 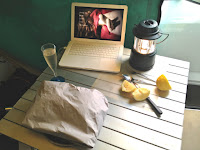 Get a cubby, or if you already have one, whatever form it takes - use it.

It's good for the soul.

Slices of Life on the Midland Train

One of the cross-town passenger rail services in Perth runs from Midland, in the east, through the city to Fremantle, on the coast. It takes about an hour, with many stops, and along the way passes through suburbs covering a very wide range of socio-economic levels. In addition, the train itself sometimes serves as temporary accommodation for the disenfranchised, who somehow manage to avoid the ticket inspectors and stay on the train for many hours. Finally, in common with all public transport services, the train carries its fair share of the drunk, the drugged and the disturbed.

As a result of these factors, there is frequently something noteworthy to be seen or heard on a journey to or from work, and I have gathered a selection here. I have tried to maintain a non-judgemental tone, to avoid giving offence, but if I have failed in that, please accept my apologies.  Everything that follows is true and unembellished, and all happened in daylight hours in moderately crowded carriages.

1st Slice
A loudly drunk man (mid 30's) boarded the train, accompanied by two women of similar age, and 4 young children under 10. He proceeded to walk up and down the aisle near them, yelling obscenities and repeatedly threatening the women with the most disturbing physical and extreme sexual violence, all described in graphic detail. Upsetting though this was to watch and listen to, the passivity of the women and the complete disinterest of the children was even more shocking. Obviously the whole scene was very familiar to them, and the fact that it was happening in public did not seem to bother any of them.

2nd Slice
A teenage girl sitting opposite me was yapping loudly on her mobile phone about another friend of hers who had recently "lost her virginity" (I didn't even know that phrase still existed), and who had subsequently posted all the details of the occasion on Facebook. I instantly realised I needed more interesting (or at least indiscreet) Facebook friends. 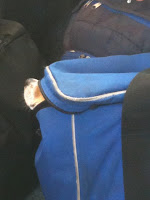 Two dishevelled men in their late 30's boarded the train and sat down together, obviously knowing each other, but not speaking. One of them had the wild-eyed appearance of someone suffering from a mental disorder or substance abuse, and he had a zipped-up sports bag which he placed carefully between his feet. In common with most regular train users, I try to avoid eye contact with anyone looking a bit "disturbed", but when he unzipped the bag a few inches and a small dog stuck its nose out, I must have looked a bit surprised, because he leaned over to talk to me. He told me that everything he owned was in the bag, and the dog was his constant companion. He was usually homeless, unless his friend (the fellow next to him) happened to be living somewhere with enough room for him. He could not stay in any of the city's homeless shelters because they didn't allow dogs, and he could not leave her. Fascinated despite myself, I asked how old the dog was, and how she coped with life in a bag. He said he'd found her on the street several years ago, and she didn't seem to mind being zipped up in the bag for most of the day. Certainly she looked to be in no distress, gazing about her with interest for a few minutes and then quietly withdrawing into the bag again. I can't imagine what their life is like, but I guess at least they have each other.

4th Slice
Sitting opposite me was a mid-20s man with a toddler. He chatted amiably to a younger man next to me, comparing notes on various prisons they'd recently been in. Both of them had 2 young children, all under 5, and they agreed that's the worst thing about getting caught. (!!) The fellow opposite was taking his daughter to visit an uncle who was dying in hospital after hanging himself the previous day - "they're deciding whether or not to pull the plug".

5th Slice
Simultaneously confronting sights: an approximately 6 months pregnant woman who smelt strongly of alcohol (mid-afternoon) and had her cigarette lighter ready to light up as soon as she got off the train, and a 20ish man in an electric wheelchair, with extremely stunted arms and legs. He managed fine, but after sitting next to the expectant "mother" for 30 minutes, I felt so sad that he had done nothing to contribute to his condition, whereas ...

6th Slice
A sad and ugly scene at Midland train station. Following the aggressive robbery of an elderly passenger on the platform, the young offender was pursued by two policemen. The police finally caught the boy, but it was very disturbing to see many people yelling encouragement to the boy and very crude abuse at the police. Obviously, none of these onlookers spared a thought for the bruised, frightened and badly shaken victim.

7th Slice brings a smile
Something you don't often see on the train: a middle-aged man in tight lycra bike shorts (eww) with a racing bike ... and carrying an electric guitar. Good for him!

And finally, a crumb of comfort to reassure me that all is not lost
After an hour on the train, I arrived at my destination to find myself without my wallet, which meant I had left it on Midland station. From the above accounts you can guess how sure I was that by this time my credit card would have been put to excellent use. But no, someone getting off the train I boarded had noticed the purse and handed it in to the station guard, all intact. They did not leave their name, but I thanked them through the local paper, and the episode still gives me comfort every time I witness something distressing on the train. There are many good people.
2 comments: