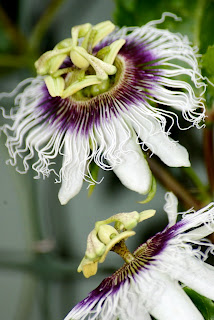 As I have previously explained, I spend much of my "work" time as a volunteer, because I like to give something back in return for the privilege of not having to work full-time. Having dogs rather than kids is the secret, I feel. ;-)
Just as with paid employment, though, there are plenty of ways in which volunteering can lift your spirits or get you down, and after a recent roller coaster ride in this regard, I thought I'd share some of my highs and lows over the last few weeks.
Plus, my passionfruit vine has just come into flower. ->
DMOZ/ODP
Editing in the Open Directory Project is always a bit unpredictable, due to the extremely diverse community involved, the strong emotions it evokes in supporters and detractors, and the fact that it seems to have lost most of its direction and enthusiasm over the last couple of years.
In my last post I mentioned an unpleasant reminder that when it comes to any conflict between worker and management, the latter holds all the cards. Respectful acknowledgement of alternative viewpoints, willingness to listen to suggestions, and polite agreement on a compromise seem like simple good manners and common sense to me, but they are not the ways some people like to exert their authority. An astonishingly short-sighted view, I feel, particularly in an organisation which relies completely on volunteers to do all the work!

However, I do eventually know when I'm beaten, although I admit to being embarrassingly slow to get the point. In fact I often remind myself of the Black Knight in Monty Python's "Holy Grail", who kept up his defiant challenge to King Arthur long after he should have given up. "It's just a flesh wound!". lol
Bush Firefighting
I have been very proud to be an active member of two volunteer brigades over the last 12 years or so, and I used to delight in the look of surprise on people's faces when I explained that I was qualified to drive the big fire trucks. I have helped with many bush fires, large and small, and I have immense respect and admiration for all the volunteers involved in this often dangerous work, as I highlighted in Bushfires in Western Australia.
Unfortunately, however, the brigade where I now live has not proven to be as cohesive as the rural one to which I previously belonged. The internal politics and prejudices have been as divisive, and have led to the same lack of direction and enthusiasm that I have sadly observed in DMOZ/ODP.

Is there something about volunteer organisations which eventually leads them to crumble from the top down?? Perhaps those volunteers who rise to management positions are merely keen, rather than having any experience or aptitude in managing diverse groups?
To repeat a research finding from my post almost one year ago:

"In a national study on volunteerism done by the UPS Foundation ... the second most frequently cited reason for ending volunteer involvement - following conflicting personal reasons - was the “Poor management of volunteers”.

40% of these volunteers stopped volunteering for an agency at some time because of one or more poor volunteer management practices. Volunteers felt that the organization was poorly managed, their time was not well spent, the experience was not a good use of their talents, and tasks were not clearly defined ..."

Let's finish on a more positive note.
My weekly sessions as a volunteer tutor with Read Write Now! are proving to be immensely rewarding and enjoyable. My "student" is a middle-aged man previously so ashamed of his poor spelling and writing that he has spent his life avoiding having to write anything. But yesterday he showed me a short story he had written for the organisation's yearly magazine!
I was speechless with admiration at his bravery in striking out like this after a lifetime of feeling embarrassed and inferior.
Ah - the power of words to lift the weary soul. :-)
No comments: