There's nothing new under the sun, apparently.
As a result of a news item today about the explosive-packed underwear of the would-be terrorist on the Christmas Day flight, I wondered how long it will be before someone comes up with a Silly Season name for the inevitable investigation into how he managed to avoid detection at two major airports.
Of course a front-runner would be "Undiegate", but I was disappointed to find that it's already been taken, back in 1997, when a New Zealand MP was publicly humiliated for spending $89 of taxpayer's money on a pair of boxer shorts for himself. My next brainwave was "Budgiegate", in deference to the grand Australian tradition of referring to tight men's underpants as "budgiesmugglers".
But that's already been used as well, darn it, when a pet bird was smuggled into a high security prison in Ireland in 2007.
Looking at the picture of the terrorist underpants, it is easy to imagine the very localised effects of even a tiny explosion, so this opens up a new line of thought, such as "Knackergate" or "Castragate".
Perhaps we should simply return to the "Gate" which started this whole rather derivative naming trend. So this scandal could be "Watergate II", because of the obvious connection between the two, er, "Dicks".

Have you noticed that people who don't volunteer for things are very quick to criticise those who do?
I suppose it's driven (at least partly) by guilt, but it seems incredibly shallow to complain about someone who is doing something you are not willing to do yourself!
Not only are many people depressingly quick to criticise the efforts of volunteers, but it seems that some of them can't even grasp the concept. These people refuse to accept that someone might choose to give their time, effort, expertise or whatever, without expecting anything in return.
According to these cynics, nobody in their right minds would do something for nothing, and even if they can't find any evidence of payment, they simply refuse to believe there is none, and frequently accuse the volunteer of accepting "secret" payment for their services.
Regular readers might guess that I talking about the deluded individuals who stridently accuse volunteer DMOZ editors of accepting bribes, without ever providing any evidence, and certainly that is a classic example of this misguided behaviour.
However, I recently came up against a similar attitude in my local community, where an offer to create a website for a local arts and crafts group was met with suspicion and distrust. Having done the same thing for several years (absolutely free of charge) for our community learning centre, I was astonished to be suspected of ulterior motives, but apparently the whole idea of volunteering is simply foreign to them.
To all such people I recommend this wonderful photo. 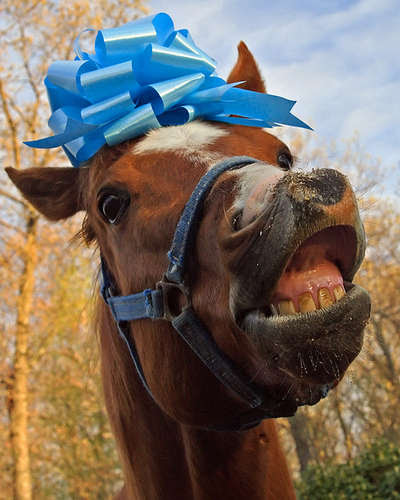