Delight and Disappointment on the Indian Pacific (but no murders) 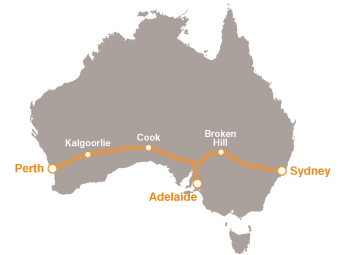 Click here for a Photo Album of the trip

I will season the inevitable food photos with people observations.

Off to a roaring start on both counts on the first night with Grilled Haloumi in a Field Mushroom (the menu description was more explanatory but I forget the content) then Grilled Barramundi with Stuff (ditto). Both outstandingly delish.

I managed to forego the Belgian Chocolate Mousse in order to feel saintly. 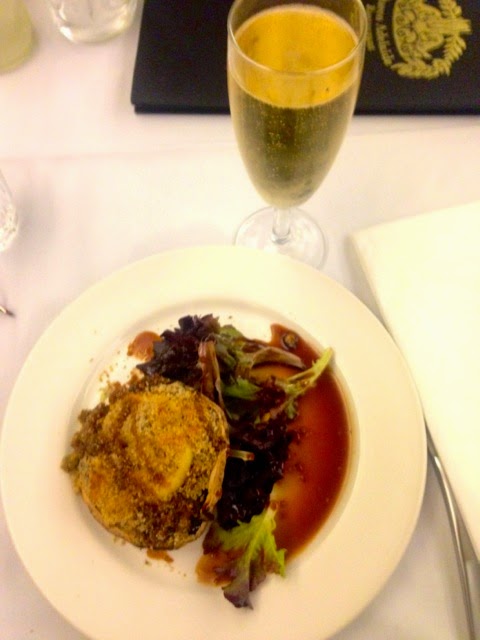 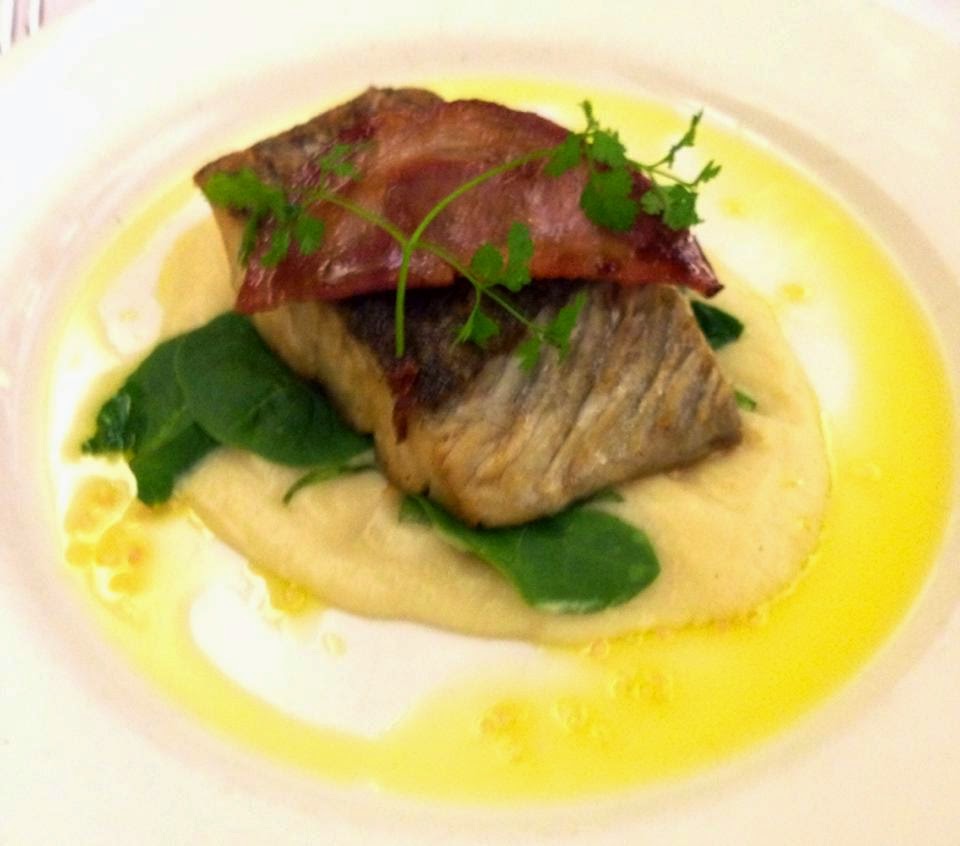 Now for the people.


Opposite me was Mr Yama-something - the quintessential middle-aged Japanese tourist full of bows and charming smiles but no Engish whatsoever. However I managed to discover this trip is a long held dream - marvellous.
The others were a prosperous Perth couple in their 60's who immediately enthralled me. She started polishing all their cutlery, glasses and plates as soon as they sat down, while he turned to Mr Y with the menu and said loudly and slowly "No noodles eh!". I have full value for my ticket already! 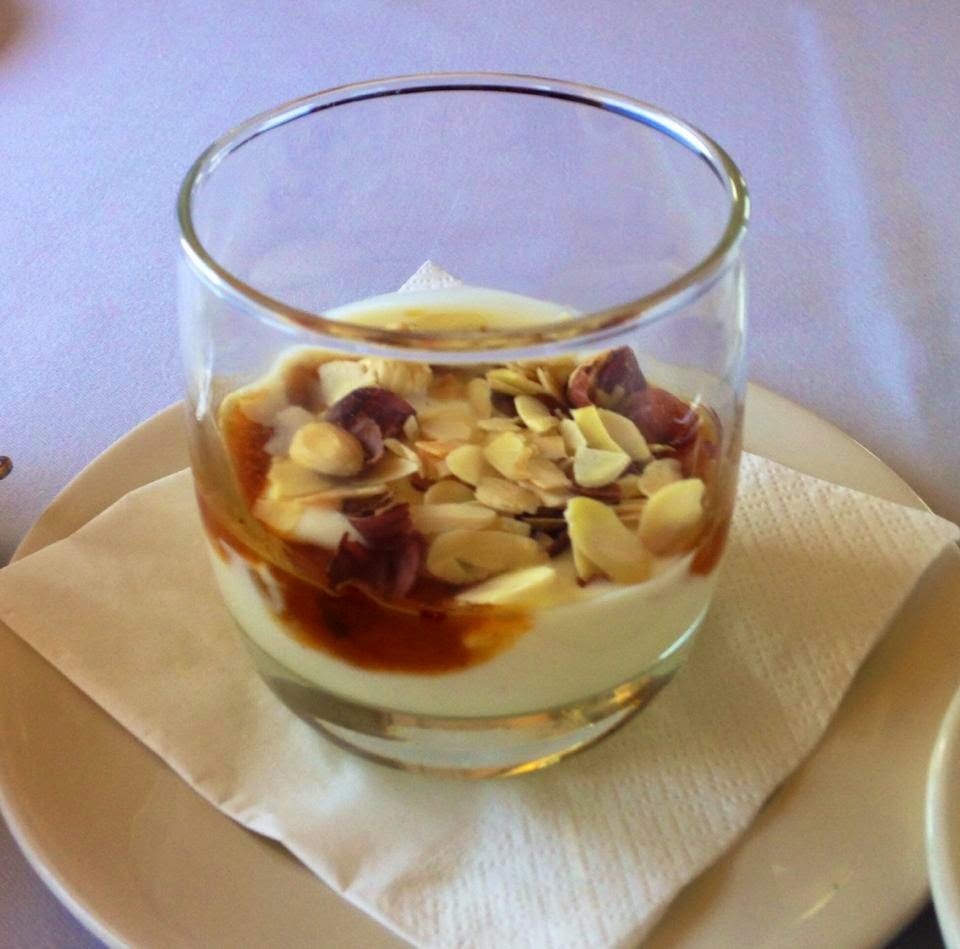 Less successful in the culinary department - took a punt on some unfamiliar things like this poached peach, vanilla yoghurt and quandong compote for breakfast - very pretty but just, well weird, so I had a full English Breakfast to take the taste away. 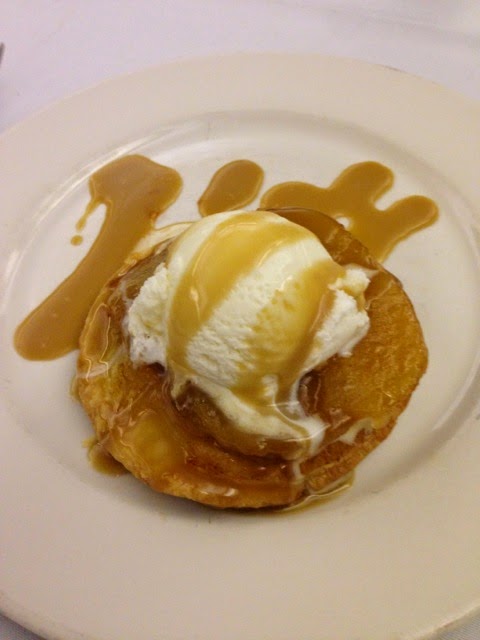 Poor choice for dinner too - the Beef Cheeks with This and That were lovely and tender but too reminiscent of boarding school stew to be yummy, and decidedly unphotogenic, so here's dessert instead - sautéed apple slices on puff pastry with vanilla bean ice cream and butterscotch sauce. Luckily both pretty *and* yummy.

And now the people stories. As the 3rd youngest on the train I was the only woman not creating something for grandchildren, but I was lucky enough to meet an old guy who was a farmer, a miner and then a cray fisherman, so we had a chat about Dalwallinu and other Wheatbelt beauty spots before he discovered I'd driven a big tractor in Canada, and then we were off the conversational starting blocks!

We ended up at the same table for dinner as the delightful Mr Y from the previous night, who was full of beans and happy laughter. In fact his English was a bit better than he'd been willing to share with the Pompous Perthites, and he kept diving into his satchel to show us photos of his grandchildren, his dog (a "Fawencha Boowadogga"), a postcard of a Japanese train, and other charming memorabilia. Of course I showed him my screensaver of my own dogs and he literally shrieked with laughter. He made my trip. :-)

At one point we found ourselves trying to discuss the history of the train, which included the fact that it used to be steam powered. It was only later that I delightedly recalled the spectacle of two oldish adults both making enthusiastic choo choo-choo noises and, yes, I'm proud to say we simultaneously did the siren hand gesture and went woooo-wooooo. Not surprisingly this brought more shrieks of
delighted understanding from Mr Y.

I felt very proud of our international communication skills.

On the 3rd night I was once again randomly allocated to a table with Mr Y (whom I now suspect of being cannily perceptive about his companions) and a rather severe older lady called "Irene, and please pronounce the final E".

After introductions she turned to Mr Y and asked the standard train questions (where you got on, where you'll get off, is it your first trip etc). Mr Y kept turning to me with the classic hands-together entreaty, so I "translated" the questions into a more familiar form and he was able to answer.

After a few of these exchanges Ireneee said rather sharply to me "Please stop helping him - I'm certain he speaks much better English than you seem to think." Even worse than the Great Noodle Incident of the first night! I was aghast, but Mr Y did not react except to withdraw into silence as Ireneee explained she'd taught English in Japan for 4 years many years ago, and never met anyone with Mr Y's apparent limitations.
Remember he was still sitting beside her!!

As she went on to espouse her religious views concerning the afterlife (I'm not kidding) my attention was easily drawn to Mr Y who was apparently nodding off and in imminent danger of falling asleep on her shoulder. He kept opening his eyes and straightening up, but soon began tipping towards her again. She was by then in full flight about arguments she had had with atheist friends, so I was terribly disappointed when our meals arrived and he woke up.
I watched carefully for a conspiratorial wink when he left, but even without it I will happily believe he did it on purpose. Onya Mr Y. :-)

The Big Buzz the last morning was that the train had been attacked by bushrangers overnight! Or at the very least armed miscreants who attacked us in our beds! 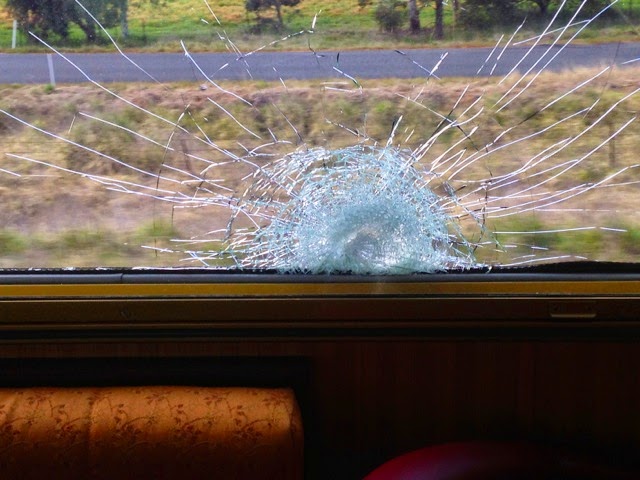 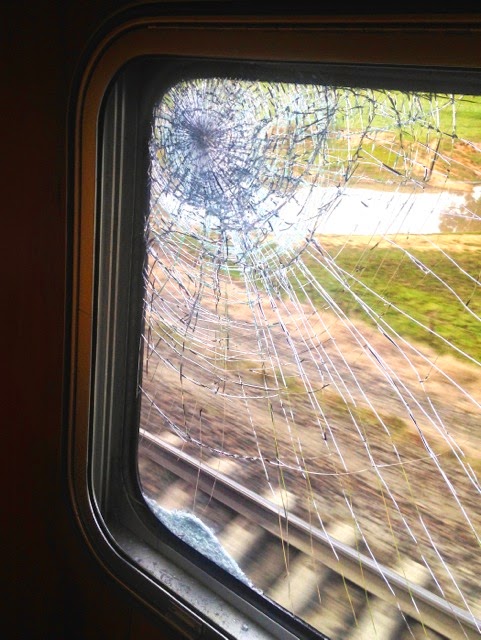 Well, we were in our beds when it happened, which is near enough for narrative purposes, but as you insist on quibbling I'll be forced to show you my post-traumatic breakfast.

Grilled sourdough with eggs and smoked Tasmanian trout, as you ask. 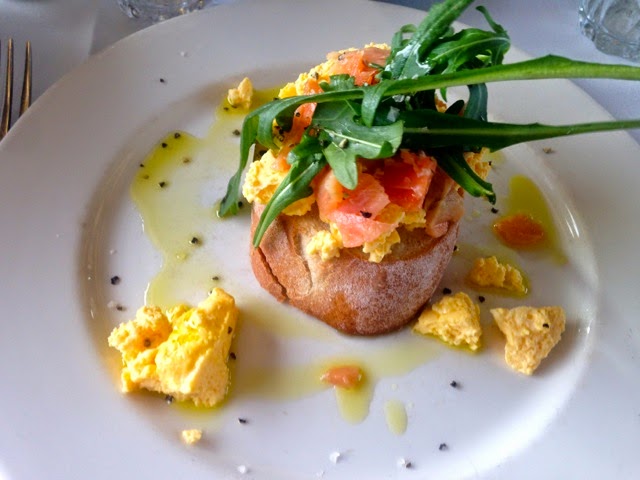 And Now For the Disappointments
Here is part of a letter I sent to Great Southern Railways on my return (minus the photos I included to illustrate my points):

Safety Concerns on the Indian Pacific
1. Throughout the whole journey, many of the exit doors were blocked with heavy and/or hard to move items which would dangerously impede exit in an emergency. In some cases both exit doors at the end of a carriage were blocked [with] baggage, walking aids, wheelchairs, ramps, bags of laundry and boxes of supplies.

2. The shower and toilet facilities in the Single Sleeper carriage were very cramped, with an inward-opening door for the toilet. If a passenger collapsed or suffered some other emergency while inside, there would be no way of reaching them without somehow removing the door.

3. In addition, the Call buttons in the shower and toilet were high up and completely unreachable if someone was on the floor.

Cleanliness Concerns on the Indian Pacific
The following examples of a very poor standard of cleanliness are not what I would expect for a $2000 fare in "Gold" class.

My primary interest on this trip was photography, but the windows in my allocated cabin were too streaked and dirty (on the outside) to focus through. At my request I was moved to a cabin on the other side of the train where the windows were a little cleaner, but I soon found they were still too dirty for photographs.
I mentioned this to the Train Manager, who kindly came and cleaned the internal surfaces, but this made only a marginal improvement. At his suggestion I checked all the windows in the Lounge and Dining cars, but they were also too dirty. I was not the only passenger to complain about the dirty windows - people with compact cameras were completely unable to focus through the grime.
I wish to stress that the windows were dirty right from the start - while the train was still in Perth. ... In order to take reasonable photos I was obliged to stand in the exits, because the single-glass windows in those doors had been cleaned. As I did this for several hours over the course of the journey, I felt very irritated that I could not even sit down to take photos with a steadier hand.

On previous journeys the single cabins had their own toilet, but now the 18 Single Cabin passengers share two toilets, one of which became blocked every morning, reducing us to one for most of the trip. Each morning this rapidly became unsanitary with splashed urine, inadequately flushed waste, and toilet paper littering the floor. It appeared to be cleaned only once or twice a day, whereas it really needed cleaning at least every 2 hours.

Again, there are two for the 18 Single Cabin passengers, and as with the toilets, these were in very poor condition. The nylon curtains reached only halfway to the floor, meaning that any clothes brought in got wet from the shower. The curtains were also missing several of their runners, making them hard to pull around the shower. The shower head was very calcified, leading to an erratic spray which easily got past the short flimsy curtain.
There was no exhaust fan, and the light was half full of dirt/dead insects, making the tiny room very dim. There was no rail and only one hook for towel and robe, and these fell off very easily onto the wet floor, which drained very poorly so that there was always standing water. The walls and floor were stained and the soap containers were empty.

My cabin had been inadequately cleaned in Perth, without the wash unit being wiped down, [and] The seat did not appear to have been vacuumed properly, because I found a used tissue down the side.
... I feel that the Single Cabin carriages are long overdue for refurbishment, and that they do not offer the value for money, comfort and amenity that one is entitled to expect from "Gold Class".

I noticed that none of the Single cabins or facilities are featured on your website, and now I know why.

At the time of writing, I have received only a brief acknowledgement of my concerns, with a promise to "pass them on". I have asked for them to let me know when they've been addressed.