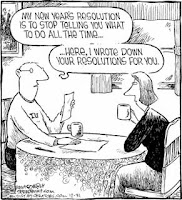 Forgiving towards those who cause us distress, pain, and hardship. Let's assume that they did so through ignorance, inattention, or misunderstanding, rather than from malice, greed or envy.

Generous towards those whose lives would be improved by some small effort on our part. Give unwanted presents and other items to a charity, sell them and donate the money, share your good fortune by regular contributions throughout the year, or become a volunteer for a worthwhile cause.

Understanding of the foibles, fears, hang-ups and other "issues" that affect everyone, and which sometimes result in actions and reactions which are inexplicable or inappropriate.

Gracious towards those whose talents, skills, fortunes or relationships seem better than ours. 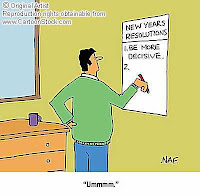 Resolute in the face of misfortune, injustice, and other calamities not of our making. Not being responsible for causing a situation doesn't mean we can't be responsible for fixing it.

Honest about our mistakes and errors of judgement. Trying to cover it up or, worse, shifting the blame to someone else is often tempting, but always makes the situation worse in the end, and adds to our own burden of guilt.

Patient with those who seem to be "wasting" our time. Rather than getting irritated and frustrated, let's assume that they are trying their best, or that they have other things on their minds.

Optimistic that the above virtues can be sustained just a little longer than they were last year. Perhaps even into the second week of January?

Realistic about success in this and all other endeavours. All we can do is our best with what we have.

Above all, let us be kind to ourselves and others, regardless of achievements, and certainly despite a lack of them.