Well, yesterday's "Dawn of a New Era" in physics wasn't quite the spectacular event that you'd expect for several billion dollars, but at least the dismal predictions turned out to be groundless, and we didn't all disappear into a black hole. Now that would have been (very very briefly) a true spectacle!
Rather to my surprise, I have in fact been following the development of this immense project with mild interest over the last year or two, not because I understand the principles, and even less because I care about the potential discoveries. My fascination is with the vast number of people (8,000 of them, according to the report in the Washington Post) who have been involved for so long on such a single-minded project with un-knowable results. How do they maintain their interest and enthusiasm? Certainly, many of them will have worked simply for the money, but there must be a significant number who have chosen to stay on the project because of their belief/hope that it will achieve something extraordinary.
Personally, I've always been more interested in serendipitous discoveries than in massively organised, expensive and ambitious experiments, and it will take more than a little puff of light on a monitor to maintain my interest.*(see below)* I think for that sort of money they could have incorporated a few more satisfying effects, or at least a whooshing noise as the protons went whizzing around the 27km tube.
But I did get a smile from the following quote made by Robert Aymar, Director-General of CERN, who obviously wanted to say something suitably momentous:

“The LHC ... has the potential to change our view of the Universe profoundly, continuing a tradition of human curiosity that’s as old as mankind itself.”

With the Western Australian wildflower season getting into full swing, I'm delighted to be able to start my bush walks once again. I took these photos in 2006 and 2007, but with an almost-average rainfall this past winter, it should be an inspiring display this year as well. I'll take my camera the next few days, and post a couple of photos here to brighten the place up a little.
Added: it's been too wet and windy for a walk, so here are a couple of Spring photos from my garden instead, taken in the last week. 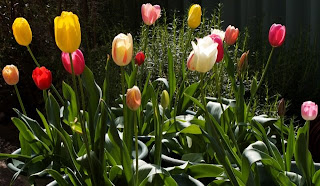 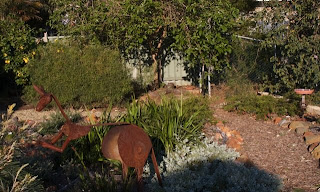 *Update on 20 September: the Big Bang machine has gone kerplonk. Apparently some of the magnets overheated, which means the recreation of the beginning of the Universe is "on hold". I love it!