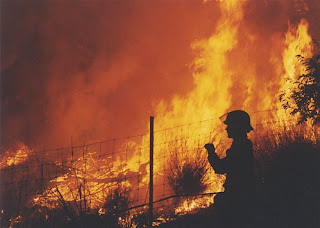 Outgoing
For a week or more I have been wanting to write about the devastating bushfires in Victoria, because not only were friends of mine directly affected (although fortunately not physically harmed), but as a long-time volunteer bush firefighter myself, I could well imagine the terrifying situation many of those volunteers found themselves in.
Here in Western Australia we do not generally experience firestorms such as those in the much denser bushland of Victoria, so I have absolutely no experience of walls of flame travelling faster than escaping cars, or of houses exploding in succession.
And I certainly have never had to deal with the overwhelming distress of finding family members, friends and neighbours dead. It happened too many times in these fires. Think about that.
But I have seen how quickly things can get out of control, and I have felt myself lucky to be working with far more experienced volunteers who were able to make quick enough decisions to get us all to safety. In this Victorian disaster, one volunteer was killed, and several others were injured, but in view of the huge numbers of firefighters, and the awful death toll among residents, it is a tribute to the training and organisation of the volunteer fire fighting force that the number of casualties was not many times higher.
And remember: all these firefighters are volunteers. They do their training and all their fire fighting in their own time, with no financial reward at all. In many cases they have had to pay for their own protective uniforms (although these are now subsidised by local and state governments), and the hours they spend defending their areas are usually way beyond what any industry would consider reasonable. It is common for volunteers to spend more than 12 hours on the firefront, and of course fires blaze on for days or even weeks on end.
The families of these volunteers also contribute, in all sorts of ways, while the volunteer is away from home, and the worry and constant concern must be very draining. Employers are usually very understanding, and allow their employees time off from work to attend to the fires, but in some cases their selfishness is almost incredible, such as one employer who made a firefighter take annual leave to volunteer in the emergency! Another employer refused to let the employee join an interstate volunteer "strike force", despite his high level of experience and bushfire qualifications.
I wonder how these employers would feel if it were their homes and families under threat?
So I would like to add my heartfelt thanks to all the volunteers who worked so very hard, under such terrifying conditions, to protect those towns, people and property.
Heroes, every one.
Incoming

We all bloom under a light sprinkling of praise and appreciation, and it is often the small but unexpected expressions of gratitude which touch us most. I am fortunate to have experienced two such situations in the last two days.
As a somewhat battle-scarred volunteer in the Open Directory Project, I am sadly too aware of the lack of appreciation shown by directory management towards all those editors who devote some of their spare time to building and improving the directory *(see below). Unfortunately, some people seem unable to accept the importance of recognition and respect in any volunteer organisation, and the absence of these simple measures can cause both morale and participation to decrease.
But today I had the great pleasure of the opposite situation. I received emails from two respected editing colleagues, both expressing thanks for some small assistance I had given them. Such a boost, so greatly appreciated ... and so easy to do.
I have resolved to express my own thanks more frequently to those editors whose efforts I often admire.

The second incident was equally unexpected. I cleared a section of my garden on the weekend, and cut out a large number of mature agaves.

These are prized by many gardeners, and big ones can cost a lot at garden centres. I have a great dislike of throwing away anything which may be useful to someone, so I huffed and puffed and dragged about 20 of these big plants out to the roadside, leaving a sign saying "Free Agaves".
As expected, they were gone by the next morning, but what astonished me was a thank you card in my letter box! How kind of someone to take the time to return with that, and how gratifying to know that the plants I didn't want were so appreciated by someone else.
*Added: Coincidentally, within hours of writing those words (but of course completely unrelated to them) I received a curt email from a member of the ODP/DMOZ management team, telling me to be more polite to them. As I have never indulged in the sort of personal criticism to which some are sadly prone, I saw this as an example of "do as I say, not as I do", and "filed" it accordingly. ;-)

This is but one of the reasons that so many of the ODP volunteers seem to be leaving.

There are some real power-hungry authoritarians at the meta-editor level, and the ownership (AOL) is particularly clueless.

I'm confident you'll get an e-mail asking you to delete this reply.

I may or may not get such an email, but I do not have to read it, let alone obey it. ;-)
NB: I do not approve of completely anonymous comments (even if the name is not published, I think it is common courtesy to let the blog owner know who you are), but I chose to publish the above because I agree with at least the first sentence.