Canberra 3: Corrections (and some quick counselling)

I can now tell my friends I've been to prison.
Fortunately it was only for a morning, and although the admission process was rigorous, it did not involve anything more intimate than an iris scan.

As a sort of "field trip" for the Custodial Medicine unit of my post-grad Forensic Medicine course, we were taken to the brand new, architect-designed Alexander Maconochie Centre just outside the city. After 2 days of tedium, I was quite excited at the prospect of seeing inside a maximum security prison, especially when my prompt release was guaranteed!
It was definitely memorable, but a lot less intimidating than I had feared, with plenty of natural light and an air of quiet efficiency. Certainly the heavy doors (half glass, half steel) shut with a loud conclusive clang, and there were occasional announcements over the speakers, but in general it was remarkably like an office block , albeit one with a very minimalist approach to interior design.
We met several of the custodial officers, and they were affable and quietly spoken, but with the calm authority of experience, and a surprising (to me) understanding of the varied personalities in their charge. Overall, the manner and opinions of these prison staff were far more positive than I had expected, although the ever-present cynic in me wonders if we met only the best ones.
Nevertheless, the experience did not depress me in the way I feared, although it was certainly a relief to pass back through all the security checks and into the free world.
I hope it is my last prison visit.
I'll finish this series of posts with something I saw on my first day, and which will remain one of my lasting memories of the city. Canberra was purpose-built, of course, and despite the best efforts of town planners since then, it still feels rather officious and sterile. Almost everyone seems to work for the government or its satellite industries, and everyone I saw on the city streets had an ID card on a lanyard. They all seemed to be very important people in a great hurry to get to their next meeting, so it is not surprising that they don't have much time to spare for introspection. 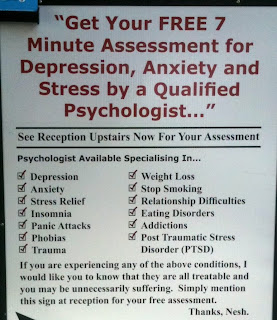 Not far from my hotel, this sandwich board was placed on the footpath each morning at 7.30 am, presumably to enable workers to pop in for speedy analysis on the way to work.
I have cropped this photo to avoid inadvertent advertising, but the therapist had included a photo of himself, and you won't be surprised to learn that he sported one of those very irritating tiny square beards in the middle of his chin.
Anyone who entrusts their angst to such a fellow, or who expects a quality service in the time it takes to write out an invoice, deserves our compassion.