ANZAC Day is commemorated on 25th April, but for some reason our local memorial service was today. I usually go to watch the march, but this year I decided to participate, in honour of my grandmother who served as a nurse in World War I, during the Salonika campaign where for every casualty of battle three died of malaria, influenza or other diseases.

Before she left for the war, she embroidered a frame for her official photograph, and a few years ago I had it mounted with her badges and medallion. 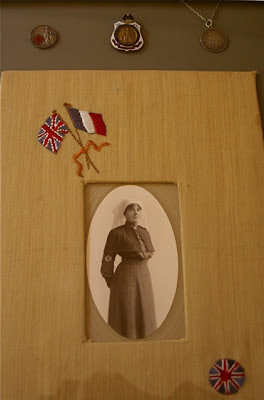 Sadly, she returned to Australia in very poor health and died only a few years later. I have no information about her war experiences, but her medallion indicates she worked at the 52nd British General Hospital in Kalamaria, so I expect her story was very similar to the following account of a contemporary:

"She left Melbourne aboard the RMS Mooltan, a mail steamer, along with 300 nurses bound for Salonika. The ship arrived at Suez on 19 June 1917 and the nurses travelled to Cairo via train. On 12 August 1917, Jessie embarked for Salonika aboard the Osmanich, arriving on 14 August 1917. On arrival, Jessie worked in British hospitals including the 52nd and 50th General Hospitals."

We are only a small community, but about 100 people took part in the march. At the front were World War II veterans, then veterans of other wars, serving members of the armed forces, relatives, and finally community groups such as the volunteer bush fire brigade and girl guides. People lined the streets, and more came out of the shops as we marched through the town. I felt terribly proud to be taking part.
Led by the local pipe band, we marched to the War Memorial where more people joined us for a short service including the always-emotional Last Post and the Ode to the Fallen:

They shall grow not old, as we that are left grow old:
Age shall not weary them, nor the years condemn.
At the going down of the sun and in the morning
We will remember them. 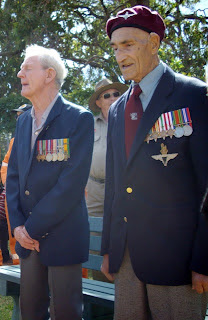 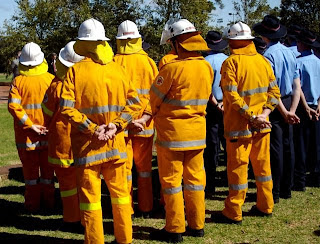 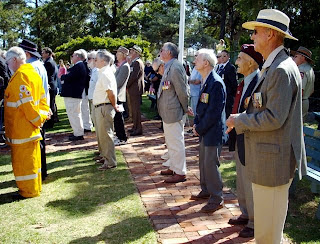 A news item today about exactly where (or if) relatives should march has attracted a lot of strongly-held opinions: http://www.abc.net.au/news/stories/2008/04/22/2223534.htm