Fraser Island - Part Two
[Click here for Part One]
"Look, no hands!" (or brains)
In my previous post I outlined some of the threats to Fraser Island's unique wildlife from selfish and thoughtless tourist behaviour, but of course in many cases the visitors place themselves at great risk of injury or death through ignoring basic rules and common sense. Spinal and head injuries are common, and there are several deaths every year. Hence the local expression "pumpkin-head" for tourists who seem to leave their brains on the mainland.
For example, one "fun" holiday activity for children is to ride in boats or trailers being towed along the inland tracks or the beach (which as I explained earlier is the island's main highway and aircraft runway). There are hundreds of unavoidable creeks, holes and washaways, and we were frequently jolted out of our seats or thrown from side to side, even inside the vehicle and wearing seatbelts. The effect on an unrestrained child sitting or standing in an open trailer is horrifying to imagine.

I should point out that there is no resident doctor, no ambulance, no life guards, and no hospital. There are very few internal tracks, and all transport has to be by 4WD. Rescue and medical attention is often delayed by many hours as the casualty is usually miles from a telephone, with the only access being a single-lane track of deep sand. Even after a rescue helicopter has been called, it can take more than an hour to arrive and another hour to transport the patient to the nearest hospital.
I'll illustrate my point with just one of the situations we witnessed during our short stay.
The wreck of the "Maheno" is a popular spectacle, but due to the advanced state of decay, the wild and unpredictable waves and currents, and the jagged metal half buried in sand, there are warning signs advising visitors to stay several meters away from the ship. In addition, all tourists are advised (through signs and information packs) that the sea all around Fraser Island is completely unsafe for swimming due to the under-currents, the high waves, and the large number of sea snakes, tiger sharks and bronze whalers which breed in the area.
Not only does the noise of the waves make it very difficult to hear the often high-speed traffic using the beach, but vehicles negotiating the sand can rarely be steered - they have to follow their own course through existing tracks. There is often no way at all to make a sudden swerve to avoid any pedestrian who wanders into their path.
So, quite apart from the most basic safety aspects of correctly supervising young children in water, can you see why this man's behaviour is critically endangering the lives of at least 3 of the 5 children in his "care"? [Click photo to enlarge it.] 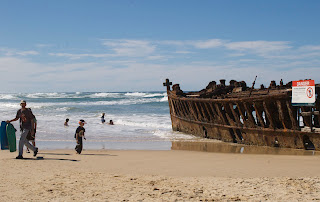 It was scary.
After he wandered off to his car, and with no other adults nearby, I went over to the children still playing in the surf. They were about 7 and 3 years old, and by now the strong current had sucked them much closer to the sharp rusty hull. I told them it was time to get out of the water, and fortunately they did so, or I would have felt responsible for their safety. Meanwhile, one of my friends was asking the father (by now several hundred meters from his children) if he had seen all the warnings about the wreck, the sharks, the vehicles, the ocean currents etc. The response was predictable and unprintable.
Perhaps he was unaware that sharks can swim in only a few centimeters of water, as seen in this YouTube video from one of the island beaches.
Perhaps he had never heard that small children can drown in even less.
Perhaps he didn't mind that his children were playing and wandering about alone beside a dangerous site and a busy "highway".
Perhaps he doesn't care.
... Or think.
But I certainly don't want to remember my visit to this amazing island as a series of eye-rolling encounters with irresponsible idiots, so I'll finish this account with a couple of my favourite images. These are what Fraser Island is really about. 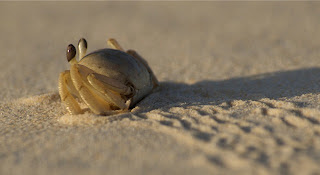 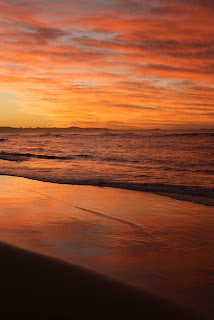 Bleh that apple site won't let me view your photos at all in IE6 (our corporate desktop standard unfortunately) - it wants a newer browswer... :)

Oh dear. Sorry to hear that, but yes you probably need a "proper" browser. ;-p
Still, I did put most of the best ones in the blog, so you can get the general idea of the place. The wee crab is my favourite. :-)

Another 2 deaths on Fraser Island this week, due to the crazy beach driving behaviour mentioned above. :-(